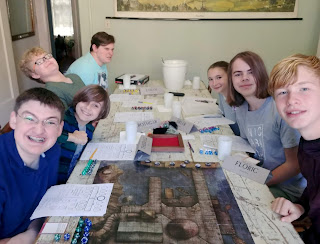 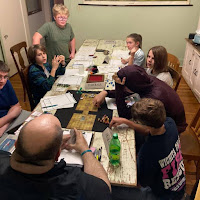 I wrote an original intro adventure for this group, complete with handouts and other cool stuff. For teaching tools, I'm using a variety of items available commercially, including the cards from the Essentials Boxed Set, because they are sweet and easy to understand.  In the future, I intend to write some special adventures that utilize famous literary characters, so people who want to, say, have a Narnia-Themed Bachelor Party (!) could run around in Narnia on the Dawn Treader. Or hang out in Lankhmar with a certain sneak-thief and his barbarian pal. Those would be for experienced players, though. 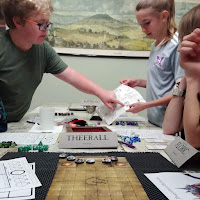 The game was fun, and it is always cool to see your players solve the puzzles you created for them. The game ran about four-and-a-half hours, not including breaks. Great game; everyone had a good time. One of the kids wasn't too clear on the concept of team play...or the idea that they were playing good characters...and he required a little extra reining in. Everyone else took to the game with great aplomb. Spells were cast, Sneaks were snuck, and axes did a lot of damage and required extra gory description. I can't help it; it's the law of critical successes.

North Texas isn't New York City, but I think I can pick up some weekend gigs. Maybe not enough to quit my day job, but surely enough to splurge on groceries once a month.