I think we're going to just skip all the usual bloggery about how it's a new year, and with it comes a renewed interest in blogging, and a solemn  promise to post more regularly and yadda yadda yadda* and start with something useful and interesting: today is Robert E. Howard's one hundred and thirteenth birthday.

For those of you who grew up on Appendix N, or maybe you came later to the party, Robert E. Howard (o "REH") is widely credited as the father of Sword and Sorcery (and, I argue, also the Weird Western as it is practiced today), or "heroic fantasy" if you prefer that distinction. I don't think it matters much what you call it, but when you add to that, "You know, Conan?" everyone knows what you mean.

I have been associated with the Texas author professionally since 2001, having penned a number of articles and essays, book introductions and afterwords, comic book stories, role-playing games, old time radio plays, and of course, an award-winning biography of the Texas author and his career, and his influence on popular culture in general.

If you are interested in checking any of that out, go for it. But I thought since it's an auspicious day that I'd drop some recent recommendations for anyone playing catch-up. Howard's stories should be required reading for any serious D&D player or Dungeon Master. 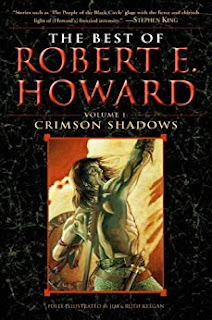 Del Rey's Robert E. Howard trade paperback series
Fourteen volumes, meticulously edited, all of the fragments, thoughtful introductory essays and afterwards, copious illustrations, and authoritative texts that make use of printed stories and rough drafts...what's not to love about these books? You may be glancing over at your shelves right now, eyeing those tattered paperbacks you bought in the 1970s, and thinking, "Pfft. I've got all of those books. I've read Robert E. Howard, Jack." Trust me...you haven't. At least, not like this.

If you've never read REH before, I would start with the two-volume "Best of" books, Crimson Shadows and Grim Lands. They will give you and overview of the depth and breadth of Howard's writing, from bawdy slapstick to terrifying weird horror, and all points in between.  If you liked what you read--Conan, Kull, Bran MaK Morn, the Crusades stories, the horror tales, Desert Adventure, whatever stuck with you--there's a Del Rey edition or two for you, full of all the extant Howard writing on that character or subject. Handy, and oh-so-inspirational.

Black Gate Magazine
Editor Bob Byrne is spearheading a series of articles called "Hither Came Conan" wherein noted authors and experts weigh-in on the various Conan stories to make the case for it being the BEST Conan Story of ALL. It's an interesting idea, and I will certainly be participating later, but for now, there's some good reading to be had on this great site.

Rogue Blades Entertainment
This plucky indy publisher  spearheaded by Jason M. Waltz was a vanguard of the new pulp movement, and now Jason is bringing it back with renewed focus and more cool stuff in the sword and sorcery vein. I know, it's not strictly speaking Robert E. Howard, but Jason now lives in Texas and came to the Robert E. Howard house for the first time last year...and now we're getting new books...coincidence? I think not!

Robert E. Howard: A Literary Biography by David C. Smith
This is the newest biographical work about Our Favorite Author to appear and it's written by David Smith, who co-wrote the Red Sonja book series with Richard Tierney, and has made several pilgrimages to the Howard House (see below). In fact, he's the Guest of Honor this year! Read his book and bring it with you to get signed (you can do that). It's a fantastic read with lots to unpack.

Marvel's Conan the Barbarian
The company that helped make Conan a household name has re-acquired the rights to the eponymous barbarian, and their launch of the new series written by Jason Aaron has been pretty impressive. Remember, this is pop-culture Conan, not REH Conan, but it's still quite entertaining.

If you're fortunate enough to have a good comic shop in your area, head that way and buy a copy of the first issue. If you do not have a good comic shop in your area, well, Marvel has an app for digital comics. And if you're one of those greate grey-neckbeard grognards who only reads on paper, and hates anything made after 1979, but can't quite remember where all of your back issues of the Savage Sword of Conan are stashed, Marvel is diligently reprinting their classic Conan comics and magazines, too. 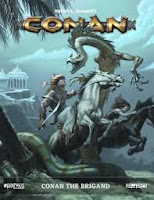 Conan Role-Playing Games
For those of you who like it a little more 21st century, Modiphius' Conan RPG launch continues apace with a brand-new book, Conan the Brigand. I am proud to have worked on this line, along with fellow Conanists Jeff Shanks and Patrice Louinet.  The system is quick and easy, and creates really detailed characters with intricate back stories before you ever start your first session.

For all of you first edition D&D and other OSR-type folks, I would recommend Jason Vey's website, which has a lot of OSR Conan and Hyborian Age gaming. It's the bee's knees. 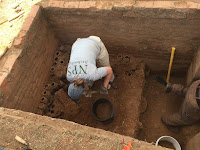 Maybe you have all of that stuff above, and other stuff, too. Maybe you've got a whole shelf full of Robert E. Howard books and boxes of comics, stacked up and sitting pretty. You're that guy, amongst all of your friends. Well, have you been to the Howard House?

If you have not, then you have missed out on a singular fan experience. Every year in June, the town of Cross Plains hosts REH fans from literally around the world for Robert E. Howard Days, a two-day celebration of Howard's life and enduring legacy. There will be panel discussions, lots of activities, tours of the house and Cross Plains, and lots of rare and unique artifacts on display. The house made national news a couple of years ago with an archaeological dig that uncovered the root cellar, seen here.

It's a pilgrimage, and one you won't forget. I go every year, because I can, but you can certainly make the trip once. You won't regret it.


There's more stuff coming this year. I've got a couple of secret projects in the hopper, as well. But this will do as a kick-off for now. Happy Birthday, Bob! I'll bet you had no idea this stuff would all be around over eighty years after your death, did you?