My Thoughts on Consent in Gaming 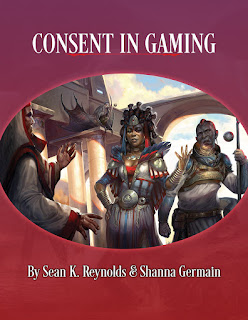 I wanted to do this on Facebook, but the comments have been shut down. So I'm going to crap on my own front porch to make this point.

Over in one of the Conan RPG Gaming Groups, someone excitedly posted a link to this new free book that was just released called Consent in Gaming. It's co-written by Sean K Reynolds and Shanna Germain and published by Monte Cook.  This free PDF is available on Cook's website and at DrivethruRPG.com (click on link to get). But what is it?

It's a short read that outlines strategies for dealing with controversial or potentially problematic situations and themes at your gaming table. It spells out a basic code of conduct for players and GMs that they can adopt and talks about the underpinnings of why this is important. The last page is a handout you can give to players during a Session Zero that asks if there's any topics or subjects they'd rather not have to deal with.

Apparently, some folks are upset. I've only seen the folks on the Conan RPG Gaming Group, but one guy jumped in and said, more or less, "So what? Big Deal. Historical barbarians raped, and they're gonna rape in games, and people shouldn't be upset about them raping in games, because it's just a game, and rape rape rape rape rapeity rape. Oh, and Rape. Cucks." *

A couple of people got behind this sentiment, but even more folks quickly tried to hammer away at that brilliantly-executed and insightful statement, the male misogynist gamer's version of "fuck you, I'mma get mine." But--get this--before everyone could dog pile on him, he rage-quit the group.

The cronies quickly changed their tune to "Look at how upset the libtards got, ooooo, so funny."

That's when the thread got closed down. I missed all of the action. From the posts I'm seeing, there are a bunch of Bro-heims  and Older Gamers venturing into Greybeard territory out there really pissed that this thing even exists. They are offended that it was written, thinks that this is what's wrong with the world today, and then they vomit up a few words designed to start a fight because they would rather throw shit at their fellow gamers than stop to take a deep breath and realize that NOT EVERYTHING IS AIMED AT YOU.

Clearly: if you're a guy, with a group you've been playing with for twenty years, and it's the same four assholes, and y'all grew up together, and your campaign is held together with the bonds of mutual shame and degradation, then no, this is probably not something you need.

But what if you're a new GM? Maybe you've been in the hobby six months, and your only interactions have been poorly-run Wednesday night Adventurer's League games as the Android's Dungeon? What if you're trying to start a D&D game in your high school and you have watched a shit-ton of videos on YouTube but you're still not quite sure if your homemade GOR setting is right for the Millard Fillmore High School Drama Club?

I wonder, he said aloud, if maybe--just maybe--when playing with a group of strangers--if some of the things in that book wouldn't be useful to new players? Or old players gaming with new people?

In today's world, with all kinds of people bumping into one another, and D&D being one of the more popular Geek Activities at the moment, I can think of a dozen situations right off the bat where it's a good idea to have a few basic ground rules (really not much more off-putting than common courtesy) in place for dealing with strangers. In several of the gaming groups I'm in, new players will routinely post that they had a weird experience with the a game or a player or a DM and the crowdsourced solution is almost always found in a lack of communication or a mis-communication or someone unwilling to communicate for whatever reason. Consent in Gaming goes a long way towards solving that problem.

Okay, I can see that a couple of you aren't convinced. You probably have used the word "cuck" un-ironically in a sentence. Well, I'm a first generation gamer, and I can tell you with 100% certainty that if such a document were presented to me, and I were asked to note anything that might make me uncomfortable for the upcoming horror game we were all about to play, I would use it right away because of this: My wife has cancer right now. We're fighting it. And it sucks.  So, follow my train of thought, here--when I go play role-playing games, I want to turn my screaming brain off for four hours and play the game. I don't want to think about my family's situation. That is 100% why I am playing in the first place.

You're getting hung up on the word "consent." And truthfully, I think it's a problematic word that they are trying to do too much with, here. But the general thrust of the idea is this: if I don't want to deal with cancer in the game, I shouldn't have to.

Now, any real and reasonable GM would simply avoid those topics completely. But there's a lot of realworld stuff out there that you may not be thinking about because it's not your experience. Any reasonable person would say, "Of course, Mark, no problem. It's not likely to come up but I'll make sure that it doesn't."

Because that's just being a nice person.

But if you're the guy out there who is currently standing in the digital town square with your dick waving in the wind, screaming, "You know what? You don't like it, tough titties! It's my game, I'll run it how I want to, and if you can't handle it, you've got the problem, not me, Snowflake!" If that's you, right now, then you can fuck right off. This is a hobby. It's supposed to be fun. And this kvetching and moaning and feeling like you're being yelled at, when in fact, you aren't, and never were? That's all you, making this not fun.

NOTES
* Okay, that's not really what he said. In deference to this guy, a person I don't know, I'm going to quote him exactly so that you get the proper context for this:

Bahahahaha yes bevause savages and barbarians follow the rules. Wtf is this liberal cuck bullshit. Barbarians rape pillage and burn. So thats what they gonna continue doing thank you very much.

This was almost immediately followed up with:
.....stfu, i dont care about how you view your modern day version of conan, barbarians raped pillaged and killed as a living. Its what they did from the sacking of rome to the pillaging of the nordic countrysides, whats left behind after a barbarian or savage raid is death, destruction and lots of raped women and captives. Because thats actual history. So if you want any sort of historical accuracy youd play as savages and barbarians and not this la dee da version of conan meant for liberals.

Email ThisBlogThis!Share to TwitterShare to FacebookShare to Pinterest
Labels: 5th ed, chuckleheads, Consent in Gaming, Gaming Culture. RPG culture, Monte Cook, this is why we can't have nice things