For those of you were on the fence about whether or not to back my recent Kickstarter campaign, you can now take a look at what I was driving at: Monty Haul #0 is now digitally available. 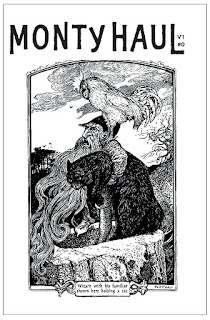 Monty Haul #0 is a Proof-of-Concept issue, full of assorted optional rules, backgrounds for characters, and more! Featuring a new take on familiars, two new cleric domains, a simple and not-so-deadly critical hit system, the Divine Archeologist archetype for rogues, and several new backgrounds including an expanded trio of options for the noble: dilettante, disgraced noble, and knight errant! Also included is a Noble Family House generator to quickly design interesting families to plague your nobles.It's a cornucopia of usable options, written in a light and conversational style and grounded in the gaming days of yore. If by "yore" we're talking about the early 1980's. Monty Haul is suitable for discerning DMs and players of the fifth edition of the world's most popular fantasy rpg.