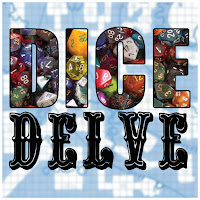 From the very first set of dice I bought from my local hobby store, there's just something cool about "official" products for your game. It's like saying, "Okay, here's what we recommend you play with." The first of these TSR dice were called "Dragon Dice" back in the day, and while they were a necessary item at the time, the dice were made out of terrible plastic that didn't last six months before they started cracking and chipping on every edge. By the time TSR had corrected their "official" dice, they had been supplanted by a horde of other, better dice manufacturers selling quality, high impact plastic dice that looked like jewels. Game over, TSR. Game over.

Eventually, TSR crept back into that corner of the gaming marketplace, and did so with some modest dice that were clearly sourced from a major manufacturer. No more of those soft pastel dice that chipped and cracked at the edges like mica! And while they never got that market share back, it was a nice side-item of sorts.

Now D&D is in the capable hands of Wizards of the Coast, and these guys know how to accessorize. Have you seen those spin-down life counters? Those cool d20s with the speckled pattern and the Magic: The Gathering symbol on the 20? Those are so cool! If they can do those, and produce them for every one of their M:TG sets, then a set of dice for D&D should be a walk in the park for them, right? ...Right? 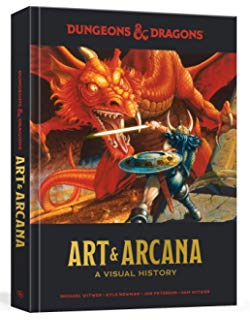 You have probably seen or heard about this massive tome on The Internets or maybe seen a review on The YouTubes. Art & Arcana is a ginormous, too-big-for-a-coffee-table Coffee Table book that's really a giant victory lap of sorts for the World's Most Popular Role-Playing Game. Not in a bad way.

This product was released in two versions; the one pictured on the left, a whatever Amazon is charging for it these days $50 investment that is equal parts revisionist history and art and marketing survey. For old-timers, there is a lot of "Oh, I remember that!" and "That's my favorite Module Art!" moments, along with company history that manages to be earnest in not quite dishing the dirt, but happily pointing out the quirks. It's big, it's heavy, it's hard to read. But for those of you who want something a little more upscale, read on, McDuff...