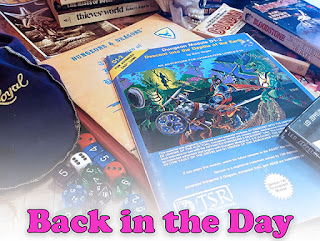 I mentioned this before in my litany of stuff I used to play, but I wanted to drill down on this because I'm going to be talking about campaigns and how I run them and why I run them the way I do. It's mostly because of Lankhmar: City of Adventure.

Back in the 1980s I was a good li'l consumer of TSR's stuff. I kept up with new releases, back when you actually HAD - TO -  KEEP - UP with stuff; there was no button to click, no page to "like." You had to remember to call the hobby shop or the bookstore once a month. You had to read magazines and actually look at the ads. You had to look on the backs of modules for lists of other products. You had to talk to human beings in meat-space. You had to beg rides to the mall (or gas money, when you could borrow the car).

There is a reason, terribly misguided, why some older neckbeards feel a predatory sense of ownership and do that Gatekeeper thingie; it's because they are resentful that they had to do everything that I just rattled off and modern day gamers simply watch YouTube and get much better intel on what's new, and what's coming out.

I am not saying I agree with Gatekeeping tactics, because I don't...but looking back over that list, I understand where some of the ire comes from. Still, it was the 1980s. We barely had cable. There was no internet. Our brains could handle the strain of thinking about stuff we liked, I assure you. So their anger isn't really at new fans, or girls. It's at step-father Jeff who used to call them "fairies" for reading J.R.R. Tolkien and for not taking them to the mall when he clearly wasn't doing anything but sitting around eating Fritos and drinking Busch beer all day..."private contractor," my ass...

But we were talking about Lankhmar, a product I would have bought even if I wasn't a TSR man, because it was all about Fritz Lieber's world of Nehwon and Fafhrd and the Gray Mouser, and folks, if you have not read these books, I promise you, they are required reading for any D&D player, past or present. The comics are an acquired taste, but every fantasy gamer in the world needs a copy of at least Swords & Deviltry on their bookshelf.

I had already read the Lankhmar collections, and the comic stories that were published back in the 1970s when Conan the Barbarian briefly drove everyone into a sword and sorcery frenzy, when this massive softcover squarebound thing hit the shelves in the mid 1980s. Lankhmar: City of Adventure, it said, with a spiffy (for back then, anyway) cover featuring the famous Barbarian-Thief duo in their home town of choice (painted by Keith Parkinson). I don't remember even hesitating to buy the book and take it home.

I've seen a lot of Campaign books in my lifetime; I owned the Greyhawk folio and the boxed set. I've seen stuff from Judges Guild, ICE, Chaosium, GDW, Flying Buffalo, GameLords, and I'm sure I'm forgetting some. With forty years of development at our back, there have been some amazing campaign settings, products, and urban environments for D&D. But Lankhmar remains a gold standard for a great many people. I was always surprised that it didn't become the default presentation setting for other City campaigns. It baffles me to this day, especially since so many people reference Lankhmar as being so good.

I was always particularly interested in Urban or City campaigns, since some of my favorite source material reads, like Howard's "The Tower of the Elephant," and Lieber's "Ill-Met in Lankhmar" are part of the lifeblood of Dungeons and Dragons and also, really good reads. It's more the pity that TSR chose to produce their Lankmar material in basically reverse order, hanging out in space, and had no way of telling people that weren't at GenCon every year that yes, this stuff was coming out, you need to wait, etc.

As it was, it was initially very difficult to get my players interested in a world where sorcery was hobbled and fighters and thieves had the run of the game. It wasn't as flashy as garden-variety Dungeons & Dragons; there were no unicorns or elves. The gods? They could walk the streets of the city if they were pissed. And they were basically liches. It was pretty far away from the Tolkien-esque world of D&D, which I loved, but I was the only one who did.

I couldn't sell it, so I just dropped Lankhmar in on the banks of the Greyhawk coast and left it at that. Some cool campaign stuff got lost in the bargain, but the city was soon everyone's favorite place to play in.

Later, when I got to start Lankhmar as its own campaign, I remained grateful for the way the setting was designed. It saved my ass on more than one occasion. In fact, Lankhmar was the single greatest influence on my style as a game master--all because of how it was put together.

There were three components to the original Lankhmar supplement: the big book, which contained all of the NPCs, locations, government structure, some random tables, a sample adventure, and notes about the world of Nehwon, along with some monsters. It certainly resembled other products in that it had all of the expected material in that big book.

But then there was this separate book, with cool geomorphs of city blocks, and they were intended to be used and re-used by turning them to face a north differently each time. They were designed so that you could input your own stuff on the giant map of Lankhmar.

It's huge, half the size of the Greyhawk map alone. And it's beautifully illustrated, showing all of the tiny little buildings in the town, along with regular gray squares that you could annotate and record in your big book, noting which geomorph you used and how it was oriented, and then you could write down all of the cool stuff in that block.  All of the material from the books was on the main thoroughfares, and your stuff got to be the secret back alley craziness that makes a good city adventure great.

It may not seem like much, but it was a perfect balance of details you needed featuring stuff from Lieber's own books, and "make up what you need and slot it in where you want it with our handy tools." Prior to running games in Lankhmar, I needed modules, copious notes, guides, etc. Like any young dungeon master would. But once I started using the city, the players got more agency as they were free to go wherever they wanted to go by simply pointing at the map.

They knew where the Silver Eel was, and they knew where their rooms at the boarding house were. If they wanted to take the shortcut through the gray square that they'd never been in before, who was I to say otherwise? I could even lay a copy of the square out on the table and say, "Okay, you enter the street here, and standing in the middle of this open space is a merchant with his hands in the air. There's a knife at his throat, and you can see four thugs, here, here, and here."

Many times, I had to react to what they wanted to do. Find a wizard? Okay, let's see, how does that...? Oh, well, the Sorcerer's Guild is a good place to start. Do they have any idea where that is? Nope? Okay, who do you want to ask for directions? The first person they asked would hate sorcerers, for some unknown reason. If the players wanted to lift that band-aid, I had to come up with a reason even as I was talking. It was a little scary, but really good, once I started trusting my instincts and my own sense of story. I learned how to improvise, how to DM on the fly, and how to take notes when I came up with brilliant shit to use and re-use later. It really upped my game in every way.

The best games in Lankhmar wrote themselves. What would start as a simple errand would turn into this major event with the thieves guild trying to catch our heroes, and the city guard on their tails for a crime they didn't (or did) commit. And the funny thing was, I never really felt obligated to introduce the players to Faf and the Mouse. It would have seemed anti-climactic. Occasionally, I'd have a "you just missed them" kind of deal.

Once I had the players show up at the Silver Eel post-bar-fight when the city watch had hauled them away for brawling with the guild. I gave the group three chances to see if they wanted to rescue them, but they roundly declined, instead helping to straighten the bar to get on the bartender's good side. He rewarded them with a bottle of old brandy from the stores. Before they could drink it, a man came over and offered them a hundred rilks for it. He was a collector, you see...

And we were off again. They had a grand old time while two of the greatest characters in sword and sorcery languished in jail until someone paid their fines.

I looked at my third copy of the book again recently. You know what? It's still great. There's a new Lankhmar and Nehwon campaign setting for Dungeon Crawl Classics coming out very soon that takes advantage of new notes and stuff from Fritz's papers, and so on and so forth, and yeah, that's awesome, but it still suffers by comparison to the TSR original. I can't help it. The geomorph idea is brilliant. It's the right amount of "here you go" and "you do it yourself."

I'm going to talk more about how this product influenced my playing (and writing) style in gaming in a series of upcoming articles. Look for them soon.