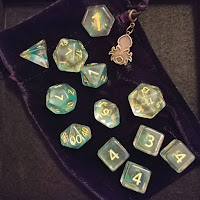 Both of these companies (and maybe all of them) had their share of bumps and hurdles. Kraken in particular was very good about communicating delays and even went so far as to reopen their pledge manager when it was apparent that they weren't going to be able to deliver the dice as shown in their promotional photos. That was a a nice thing to do, and I was one who took advantage of that. And since Kraken showed up first, I'll start with them. 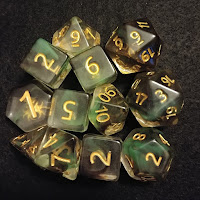 These dice were offered in a crushingly-complete line of colors, swirls, and mixes. I ended up ordering a set of Banshee and a set of Kraken. Those are color combinations, just so you know.

The sets came with a slew of extras, as per any KS you pledge these days, including two sets of metallic glitter dice, two sets of rainbow stickers (in the color schemes of the new releases), a velour dice pouch, and a metal Kraken coin in the shape of a d20.

These are all very nice, but none of them were the reason why I ordered these dice. Why did I order these dice, anyway? Oh, yeah, the mystical ethereal diffusion effect.

Well, this was a problem and Kraken copped to it early; color saturation. This is a d20 from the Banshee set, and I think you can tell it's not as colorful when held up to the light. Both of my color choices involved green and while it was more noticeable on the Kraken dice, it was much more...subtle...on the Banshee dice.

This is not to say that the dice are bad, or ugly. They are good, and they are attractive, if you like these kinds of things. Since their website shows these dice against a black background, I thought I would do the same. 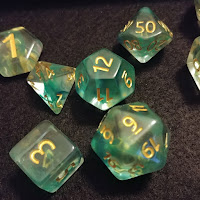 Here are the Kraken dice, and you can certainly see the green here, but I must confess, in both the picture and up close and personal, the green reads like a tint instead of a wispy smoke-like effect. I also don't think that the gold inking on the dice helped that impression. Up against a dark background like this, the dice are clearly readable, but the color scheme is something of a mess.


The Good: you get a lot of dice; 2d20 and 4d6, as well as one of their "d2" dice, which is great for branding but in my opinion a waste of plastic. The dice are solid, have a good weight to them, and Kraken likes to throw in the stickers and other tchotchkes to appease any magpies or goblins out there.

The Bad: maybe future runs will correct this, but I found the color within the clear dice to be wildly uneven. It wasn't a deal-breaker for me, other than the simple fact that these dice didn't quite meet the promise of the photos in the KS updates. Kraken was transparent about this (heh--transparent!) and up front, so this is not a dig. But I really liked the dice they ran the KS on and wish I'd gotten those instead.


The Ugly: These are a little high in price, unless you just absolutely love the way they look (and you might, at that; Here's their website to check out: Kraken Dice Mystical Iconic Collection) and don't mind your d20 dice branded with their Kraken corporate logo on the 20-side (I don't, at least not for the Kraken color, which I am much more likely to use).

But there was another set of clear-with-color-inside dice on my horizon. Let's see how they compare: 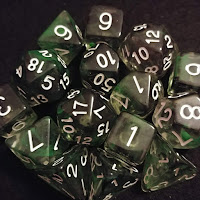 Role 4 Initiative made a sensible decision to only drop one color into the dice, and while they have fantasy-themed names, there is a more workmanlike sensibility to these sets that, I think, helps sell the idea of the "diffusion" in the dice. 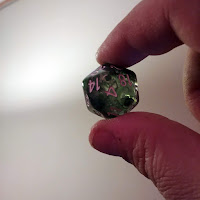 I bought one set, Dark Forest, and I was not disappointed. Right away, I noticed that the saturation on the green suspended inside the clear acrylic was much more dense, and thus, more colorful. Also, the color was more uniformly distributed throughout the dice themselves. See what I mean? Click the picture to embiggen. 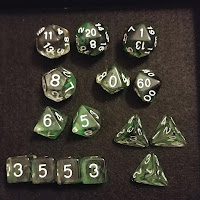 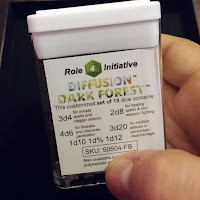 The set for this particular KS was a thing of beauty and a joy to behold; it may have been the reason why I initially backed them. Look at what you get in a set! 3d20! 4d6! 2d8?! WTF?! And 3d4! Your first level wizard can cast Magic Missile on the first day of gaming with no borrows or loaners! It's like a Christmas miracle.

Bonus: the dice show up in this innocuous container that made me instantly feel like I was buying edibles at a Canadian Marijuana Dispensary. 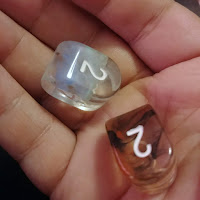 Role 4 Initiative doesn't do a lot of knick-knacks, but they did something very cool with this KS: they made a quantity of these special d4 dice in a configuration I've never seen before: nested U-shaped sides. I got two of them just for showing up, and I want more! They are absolutely stellar; they have heft, they actually roll, and they are a different shape (as opposed to a d8 numbered 1-4 twice, or a d12 numbered 1-4 three times).

Why these d4 dice aren't industry standard is a mystery to me. Maybe they are hard to tumble? Nah, that can't be it.

The good: The overall quality of the dice is fantastic. These dice are slightly larger in size, which makes the numbers bigger, and they are inked in white, and while some people may scoff at that choice, let me just say this: the white numbers make the diffusion color pop. You notice the green more because it's not having to fight the gold color to be seen. There, I said it. Gold ink is more trouble than it's worth. You can see all of their line currently for sale right here: Diffusion Dice.

The bad: More dice equals more money. I mean, that's just a fact, and these dice will set you back a bit, but it's still under $20 for their set of 15 RPG dice. Also, you have to buy their special d4 dice separately, but again, not a dealbreaker for me.

The ugly: The presentation isn't particularly sexy, but who cares? I can read their dice from across the room and the special effect that they sold the dice on can be clearly seen.


I don't think R4I is as slick as some of the other dice manufacturers out there. I get an old school, utilitarian  vibe from them that translates into a nice, solid line of dice in some unique colors and ink schemes (check out their line of opaque dice to see what I mean). But what they may lack in panache they make up for in customer service and usable products. Of the two lines I reviewed here, I'm more inclined to buy more Diffusion dice from R4I, based on color choice, inking choice, and those awesome U-shaped d4 dice.