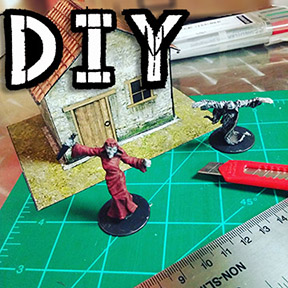 One of the great additions to 5e D&D is the concept of inspiration, a way to instantly reward good role-playing, puzzle-solving, decision-making, or any other in-game thing a player does that the DM deems noteworthy.

The current rules suggest using a poker chip to give to the player with inspiration as a token to remind them and you that they get a do-over roll by handing it in.

You're probably award of the multitude of metal coins available to gamers great and small, ranging from the baffling to the bewildering, in a multitude of styles, and that's not counting the metric ton of inspiration counters, coins, tokens and d20 holders that can be found in all corners of the Internet with a simple search.

I'm not knocking any of those things. They are great. I've ended up with a few metal coins and tokens as ancillary throw-in items, and again, they look just fine and would doubtless make perfectly serviceable inspiration tokens.

But I wanted something a little different.

I love the idea of a durable poker chip, because players are, in very general terms, ill-tempered savages. The only problem is, modern poker chips are liberally festooned with card pips, aces of spades, and other gambling symbols, as well as being colorful and cheerful and oh just never mind. You could special order some chips, but that costs a ton of money. Likewise wooden nickles, although if I had my druthers, I'd use them exclusively. They look and feel old and you can put what you want on them. Now I just need to justify spending a hundred and fifty bucks to get 4 Inspiration Tokens and I'm all set! 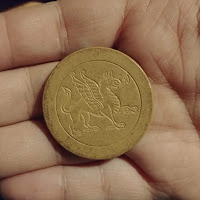 While we wait for that little miracle to occur, I found a solution in the form of vintage poker chips. I was originally looking for anything that looked old, like something made out of Bakelite, but really quickly I stumbled across these. Look! It's a dragon! Or is that a griffin? They are old clay chips from the 1920s or 1930s. And as you can see, they are perfect. 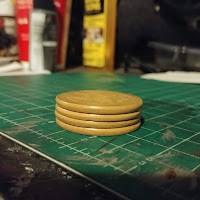 There are a lot of other styles out there, moons and stars, owls, laurel wreaths, sailing ships, lighthouses, and so on and so forth. You can find them in groups of 1 to 12 (or more) and they are relatively inexpensive. I scored a lot of around a 140 chips for twenty bucks plus shipping. With so much surplus chip action at my disposal, I decided to experiment a bit. 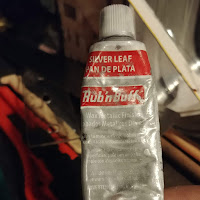 Beige is boring. I wanted something that looked like a metal coin; that would be cool. However, I don't usually like the resulting texture of metallic paints, so instead, I used Rub 'n Buff. It's a wax polish with metallic pigment. It comes in a variety of colors, but I'm using silver. 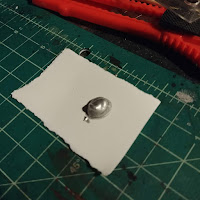 To apply, you just need a little dab. That button will completely cover four chips, and then some. You can apply it with a brush or a sponge, but I think it works best if you do it using your finger. You get a feel for what it does and according to the manufacturer, the more you rub it, the more buff it gets. That feels like a come-on, but you never know with this stuff. 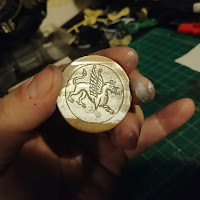 I apply the Rub 'n Buff in linear strokes, all going the same direction. This is because doing it the other way makes for an uneven coat. The goal is to lightly hit the surface, ignoring the small grooves that make up the dragon (griffin?). Do one side at a time, waiting for it to dry each time. It doesn't take long. Then you go around the edge and you are done. Unless you don't want to be. 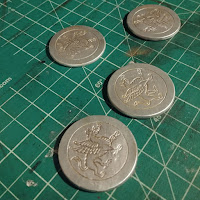 You can do a thin wash and hit the groove if you want, or you can get a soft sponge and push/press the silver leaf into the grooves, and then smooth it out again. You can even paint the whole chip beforehand. You have options, here.


Now, let's talk about the aforementioned "variety of colors" that Rub 'n Buff comes in. This stuff is designed to add accents to furniture and other decorative pieces. In a weird fit of pique, I bought a set of 12 different tubes, just to try them out for myself. 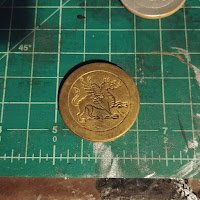 This is one of the many shades of gold they make. They work as well as the silver leaf and look pretty good. I put a black wash on the chip before I applied the Rub 'n' Buff so that the dragon (griffin?) would stand out more. 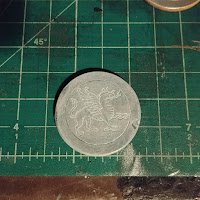 This is their antique white finish. It's intended to be a highlight for distressed wood. It's not metallic and the results are not good. But this is what it looks like. 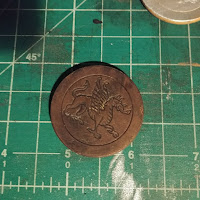 This is their Spanish Copper, and I expected it to be more metallic than it was. The light is great on this chip, but under normal conditions, it's very dark and not so great. 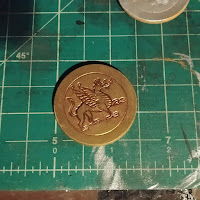 This is another of their gold colors, this time over a red chip (hence the color of the dragon [griffin?]) They have like four different varieties of gold, so it's really just a question of brightness and personal tastes. I prefer the silver, but that's me. 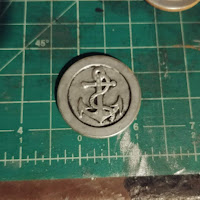 Here's one I did for my ongoing Eldritch Piracy game. I did a black wash after the Rub 'n Buff dried, and the results were so-so. Better to paint the chip before and then do a light drybrush with your finger to apply the silver.

There is also a patina color that you can apply over their metallic brass. I tried it, but you have to be very sparing with it, and I could never get it to look right. But if you can, I'd do these chips in Grecian Gold and hit the anchor with a touch of the patina and call it a day. 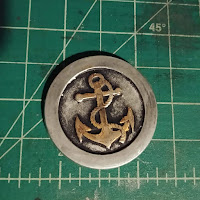 And if you want to get really crazy, here's a two-color Rub 'n Buff project, using Silver Leaf and Antique Gold. I primed the chip with flat black, and lightly applied the silver leaf. When it was dry, I carefully, oh so carefully--maybe too carfully--hit the anchor with the gold. It looks okay, and with touch-ups, it'll look super swell.

The colors of Rub 'n Buff that yielded the best results for this particular project were the silver and gold, hands down. But your mileage may vary. You could even paint them (and seal them) some other color. Silver and Gold are the two colors of Rub 'n Buff you're most likely to find in craft stores. Anything more exotic than that and you'll have to mail order it.

One quick warning about these chips; they are durable, but not indestructible. I've dropped a chip from a height of about five feet onto a concrete floor and it shatters like rock candy. For flipping across the table, they hold up just fine.

I think these inspiration tokens add a little something extra to the game; it's not a prop, but it's more than a check box on a character sheet. And there's something tactile about handing it to the DM to get that extra roll. Everyone's game is different, but these suit my play style perfectly.