We interrupt the blasted hellscape of 2020 to re-arrange some deck chairs on the Titanic. This will not make anything better, and it won't solve any problems. All I know is this: I get disproportionately incensed at the little things, because I really can't do much about the big things. There's currently a surplus of bile in my stomach from all that's going on, and shit like this doesn't help.
What am I going on about this time? I'll tell you what.

It's that "Pop Culture Pick-Your-Car" Meme.
If you have a nerdy friend, you've probably seen it scroll by on your Facebook feed. If you know only nerds, then you've likely seen it a dozen times. It's this damn thing, right here:
See it yet? I'll give you a big hint: Every single one of these cars is a car except one. No, it's not the Hearse. It's not the panel van.

It's the mother-fucking time machine.

Why this irritates me, I don't know. But if the point of the meme is to pick a fun cool car, then the whole list has to be cars. We're allowing for Ghostbusting, for pop up machine guns, and for AI robots in the hood. But it's all still cars. The Delorean from Back to the Future is a time machine that can fly. Thus making the rest of the list superfluous.

You know what else is a car? The 1966 Batmobile. Surely it's got a place on the list, yes? Or what about the Trans Am from Smokey and the Bandit? Steve McQueen's Mustang from Bullitt? The British Flag Jaguar from Austin Powers? The Bluesmobile!? I'd argue that any of those cars, or a dozen others you could come up with would, in fact, be a 100% better fit on this list than the TIME MACHINE.

I know, I know. This is supposed to be harmless fun. A distraction. A way to check out for two minutes and think about movies and TV shows that made you smile. I can't do that. I just can't. I stare at the list and think, "WHY WOULDN'T I CHOOSE THE TIME MACHINE!?"

The irony of this is that I think it's a fun idea for a meme. I do. And I like these things, in general, because they are harmless, sometimes spark fun discussions, and make for a pleasant five minute distraction until the real world comes rushing in and we all go back to day drinking. I just want the people who make these things to not...suck at it so badly. It's a good idea, but take a second to think it through, please, for all of us anal-retentive types out there.

And don't ever think that I'm one of those guys who likes to point out problems but never any solutions. Thirty seconds of Google-Fu found the original source for this meme and what do you know? The Batmobile WAS on it! Along with Herbie the Love Bug, but hey, no one is perfect.

So I reconfigured a few cars to get the Batmobile on the sheet. The fixed version is here: 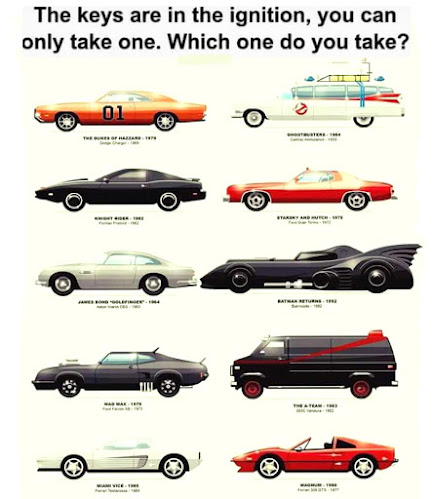 Now we can have a more nuanced conversation. And the Batmobile? I Gotta say, it' s not my first choice, here. Street parking in that thing would be a nightmare.  But's it's nice to have been considered!

For those of you who don't like the above list and want to make your own, there's this big-ass poster to cut and paste: 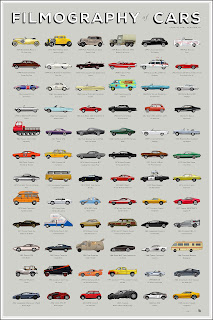 Email ThisBlogThis!Share to TwitterShare to FacebookShare to Pinterest
Labels: geek culture, I am old and grouchy, pop culture, this is why we can't have nice things