Stop Talking About 6th Edition Or I'll Burn This Place to the Ground: A Rant 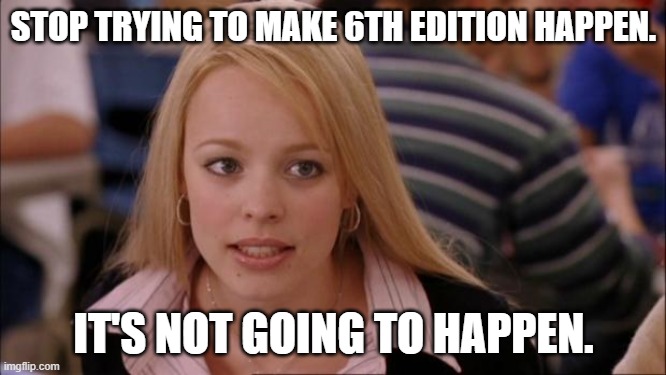 I am starting to see it more and more, now: despite the fact that there are no stated plans to do this, a small but insistent clutch of Internet pundits and YouTube Personalities are calling out for a 6th edition of Dungeons and Dragons. Nate Howe's article on CBR and Professor Dungeon Master on the Dungeon Craft Youtube channel are the most vocal champions, but there are a lot others out there. I'm no Internet influencer or Big Name Personality in the Gaming world, or any other world, really; I'm just a guy with a small following and a 'zine I am working on. But I have to say this, as respectfully as I can, in the hopes that my small cadre of fans might see fit to amply my voice with the following directive: please shut the fuck up about this. 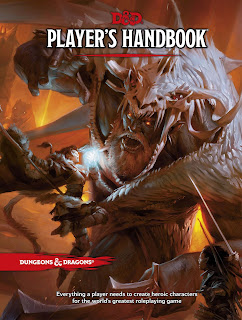 What's wrong with these people? It can't be that they are always chasing the next big thing, can it? That seems too reductive. Are these nattering nincompoops made entirely of money? Do they think we're made of money? Why would you want to scrap close to a thousand dollars worth of hardcover gaming manuals and branded accessories to address your problems with the initiative system as it currently stands? It's ridiculous, and here's why: there's nothing wrong with 5th edition.

Oh, there may be things you personally don't like about it. You may hate how the tactical stuff from fourth edition went away. Or the ten thousand nuanced character path options that made 3.5 such a delight, he said sarcastically. Or THACO.  Maybe you don't like challenge ratings, or experience points. I don't know what your problem is with 5th edition, but I do know what you can do about it: fix your own shit.

For forty-five years now, we've been quite adept at banging away at the rules, taping off the stuff we didn't play with, and building work-arounds to service the way we wanted to play D&D. We limited character options, ignored encumbrance rules, re-wrote spell-casting and critical hits, and in short beat the hell out of Dungeons & Dragons in the service of our ongoing campaigns.  Forty years later, that DIY spirit has become a cottage industry all its own. As it ever was, so shall it ever be. 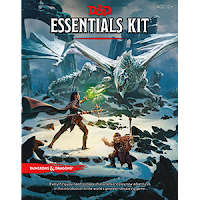 This hew and cry for a 6th edition is a solution in search of a problem. The game is still selling well, hand over fist, in fact, and all it really requires is some upgrading and organization. Update the rules to include some of the new ideas. Slightly reorganize some of the earlier releases so that they are more user-friendly. Most of the complaints being raised about what they want to see fixed in this mythical, epic 6th edition can be addressed with simple hacks. And ironically, Professor Dungeon Master's YouTube channel is more or less dedicated to discussing his various hacks and workarounds for D&D, so, what's the problem, exactly?


If you really can't wait to to drop money on another damn hardcover book, here's my proposed workaround: The Dungeon Master's Codex, a book full of nothing but 5th edition modifications. Alternate systems for experience, initiative, skills, challenge ratings...whatever little problems you may be having with D&D that's not currently allowing you to live your best life. Just slap it all into a single hardcover and let's get back to it, okay? 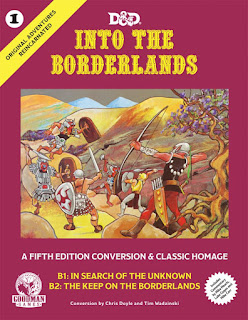 And even if there's stuff you don't like about 5th edition (and there certainly is for me), they got far more right than they got wrong. For the brand of D&D as a commodity, a known thing, this has all of the stuff you need and want out of a D&D game without resorting to experience charts, THACO, and all of the other things that have, over the years, come and gone.

I mean, Wizards is JUST NOW, five years into the release, figuring out how to put a decent campaign book together. And other people like Goodman Games are doing Original Adventures Reincarnated, a series of super sweet hefty-sized tomes that take the classic 1st edition AD&D modules and update them for 5th edition with lots of bonuses and extras. And honestly, this project is something Wizards should have had already cued up for the 40th anniversary anyway, as it's the perfect advertisement for the robustness of D&D in general and a testament to how strong the core concepts are. I'm glad Goodman Games is doing it, though, as I really like their products and their production values. 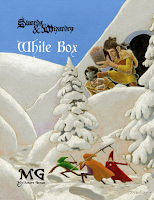 If you really can't stand the current edition of Dungeons & Dragons, but still want to have lively debates about the nature of orcs, there are literally shelves of new versions of the old rules that cover every version of D&D from the White Box to the Blue Book, all the way up to AD&D 3.5, and it's all for sale right now, waiting for you to dive in, you little contrarians, you kvetching hipsters, so you can declare, "Well, I play D&D, but I have major problems with 5th edition, so I play a game based on an earlier system...(sniff)...you've probably never heard of it..."

Awesome, sparky. Now tell me about your vinyl collection. Your stash of VHS tapes. Dazzle me.

Just stop asking for Wizards to start another complete game reboot from scratch, with all new art, new rules, new everything, and gently suggest to millions of people that this is the new and improved version of the game, because I know what's going to happen, and so does everyone else: they'll fix whatever concerns you may have, but in fixing those issues, I guarantee they will break or delete other shit you love and had no problem with, and then it's a countdown to demanding edition 6.5 or worse, 7th edition. You don't need another edition to fix your problems. Take a cue from one of TSR's old slogans and go and do likewise: These games are "Products of Your Imagination." Try having a little.
- June 10, 2020