Artisanal Craft Dice Part 2: "You Can Never Have Enough Dice!"

I was twenty four when I found myself working at Chessex Southwest, at the time when the company was growing like Audrey 2 in Little Shop of Horrors and scaring the hell out of The Armory, Wargames West, and anyone who was distributing games and game supplies. Chessex had parlayed its success as a minor game accessories provider to actually selling games themselves. It started small, with Don Reents selling stuff out of the back of his van in the Bay Area, and became a major thing, nationwide, seemingly unstoppable thing. If you ever played on a vinyl Battlemat, or used Dragonskins on your hardcover books, or owned a set or two of Speckled dice, that’s all thanks to Chessex.

When I became a salesman for the company in the mid-1990s, Chessex was making a killing as a full line distributor, but they also were selling the hell out of dice. They first imported the “European style” dice from Denmark, and they were a great thing. Nice colors, rounded edges, with slightly retooled numbers that were easy to read. They also put the number at the top of the d4 instead of at the base of the triangular face. Little things like that.

These Euro-Dice were made out of urea, a dense, granular plastic that was primarily used to make toilet seats. Strong, impact resistant, and brightly colored. They would pour the plastic into molds, heat it up to solidify it, and then strike the molds to get a set of dice. Those dice would all get dunked into a paint bucket, which filled the numbers up, and then they would dry on racks. After that, the painted dice would be tumbled in what was basically a giant rock polisher, which took the excess paint off and rounded the edges and points on the dice at the same time. The result was a clean-looking die with nice heft and great colors. 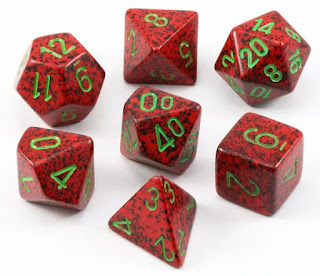 Then the Danish manufacturer stumbled onto something; basically, you could put two different colors of urea together and make dice out of them, only the colors wouldn’t blend like play dough. They stayed separate, and when tumbled, took on a soft edge that looked like a robin’s egg. Speckled. With a little experimenting, that was the start of Speckled Dice. Chessex already had a good relationship with the dice manufacturer, and they locked him into an exclusive deal for several years—in other words, he wouldn’t sell Speckled dice to anyone but Chessex. And in return, Chessex would buy a shit-ton of those things and sell the hell out of them. And so we did.

There were other dice in the Chessex line of game accessories; the translucent dice, of course, were a staple. There were some glow-in-the-dark dice in three colors. There were some special swirly-looking dice we called “Marbelized” and other companies called other names. It didn’t really matter, because, you see, there are only a few companies that make dice. Good dice, I mean. The kind you can really use. There are several American companies that make casino dice, but they aren’t practical for role-playing, not really. And there are companies—mostly in China, but not always—that manufacture game components cheaply and they make cheap, lightweight dice that feel light and cheap and you wonder aloud why even include them in your product if they are going to be like that. If you ever got the dice from a Heroclix starter pack, you know what I’m talking about. It’s those shitty dice that made us go foraging through our old family board games for those nicer, slightly heavier dice that felt good in our hands. That's what the Euro-Dice brought to the table. There were a nice selection of primary colors, and a couple of inking variations on the numbers. So, they weren’t flashy, but what they lacked in pizzazz, they made up for in weight, heft, and feel. Chessex opaque dice were the best example of that. To be completely fair, Koplow also used urea in their opaque colored dice, but their molds were slightly different (and, I think, slightly inferior). And there were still plenty of injection molded dice floating around, and they were at least of a comparable weight and scale.

That’s what made the Speckled dice such a game-changer: they were the first real style innovation in the dice making world that wasn’t a standard upgrade, such as retooling molds or finding a different kind of plastic treatment that would make swirls or sparkles. That stuff was already happening. It just wasn’t happening in Urea.

From 1993 to 1997, Chessex released over fifty different and unique “colors” of Speckled dice and sold them all. They dominated the market and saturated it and kinda salted the earth for any speckled dice to follow. Their Danish dice manufacturer made some speckled dice for some components in some Eurogames and later, of course, started doing special d20 dice on commission for D&D games and TSR games, and others as well. But there was a gap between the last Speckled dice set in 1997 and the first new set in 2001. There are a myriad of reasons for that, but one of them was that by the end of the original run, Speckled dice sales had slowed. There were only so many people out there to absorb the stock of dice being churned out.

That was, of course, 20 years ago. That was the Dark Ages. Before the Renaissance.

Next: Dealing With Danish Dice Gnomes