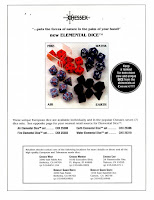 Not only did I get to sell dice to retailers, I ended up helping to make them when I was transferred to Chessex Manufacturing in 1995.  I have told this story elsewhere  but I wanted to add as well as clarify a few things from my "in the trenches" side of things. You find out how cheap (or expensive) things are; you have to think about stuff that you never considered as a consumer, such as packaging—those AMAC cubes, for example, and those tiny slips of paper that served as the label all cost money, as well. There were frustrations, like dealing with upper management who had one idea—and maybe not a very good one—and trying to navigate a way to say that without getting fired. I drank a lot in Berkeley, California. For medical reasons. 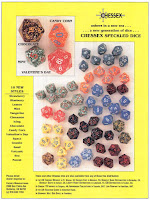 One of the most frustrating things about working at Chessex was the haphazard way that the Speckled dice came together. If you look at the first run of Limited Edition Speckled dice and compare it to the current line of Speckled dice, you’ll notice a couple of things right away. As pretty as some of the colors were in that original run, you couldn’t see the numbers for shit. Also, half of the color combinations were white and another color. Or, in the case of Space, black with white speckles. The reverse? Dalmation, which came out in the next set. More than one color had ink on the faces that matched one of the plastic colors on the dice, rendering the numbers situationally illegible. There was no design sense, no attempt at using color theory. It was just mishmashing random colors together to see what worked, from a team of two men, one of whom (Don Reentz) was not at all artistically inclined, and the other of whom was a Danish Dice Gnome. That was our affectionate nickname for the dice manufacturer. It was most frequently invoked thusly:

"Where did these big ass D6 Speckled dice come from?"

"Dunno. Jorgen made them and sent them over."

"Did you ask for these?"

The above line works best if you say it like a Leslie Knope "Oh Ann" compliment from Parks & Recreation. What was I talking about? Oh, yes. Specked dice and the making of same.

It's not that Speckled dice were doomed to failure, not at all. But they were being made with no planning, on the fly, trial and error. There were lessons to be learned from the first three sets of Speckled dice that were not being applied. We wanted to fix that, and make a concrete plan and chart a logical choice for going forward on future sets.

My buddy Well-Done was head of R&D and Product Development at this time and he wanted to create a master sample, using black and white urea, that would be 10% black, 90% white, and then another die that was 20/80, and then 30/70, and then 60/40, and then 50/50, 40/60, and so on, back to 90% black, 10% white. That way, we could see the concentration of material at a glance and calculate color combinations using these percentages. He wanted to build a color chart, using these and other tools. It would be super easy, once everything was organized, to plot out every color combination ever made and yet to be made in a single codified matrix.

All it would have taken was a couple of phone calls, or a face-to-face meeting, but for reasons known only to upper management, the Danish Dice Gnome and Well-Done were kept as far apart as possible. Our jobs, it turned out, was not R&D and Product Development and Editor-in-Chief, respectively. In reality, we were juicers, in charge of making lemonade out of lemons (and later on, squeezing blood from a turnip). 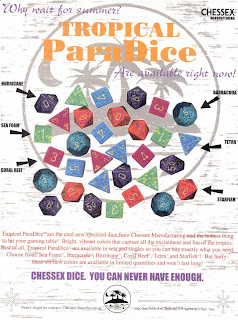 Well-Done was completely responsible for the success of the Tropical Para-Dice set. He named them, and gave those dice a purpose and a reason to exist. They were evocative. But if we’re being completely honest, it was putting lipstick on a pig. We were handed a selection of colors—that is, mashed up urea dice already made--and told to “pick the six best ones.” Shaping the Limited Edition release into a theme was part of a desperate attempt to get some control over the release of our Best-Selling Dice Product.

Well-Done was the one who got the Danish Dice Gnome to use metallic ink on some of the dice to kick up the contrast on the dice faces. They were against it, and fought him on it, but he eventually got them to try it.  Thankfully, we were given latitude to name the dice ourselves. This was the best part of the job. It also ensured that none of the small, candy-like objects that were terrible choking hazards to begin with were named after food any more. The legal department could cross that off of their to-do list.

The Action Dice release came together in a different way. One day, Well-Done was working in the warehouse, trying to invent products we could sell that wouldn’t be a huge outlay of cash. He came in and handed me a die and said, “What would you name that?” 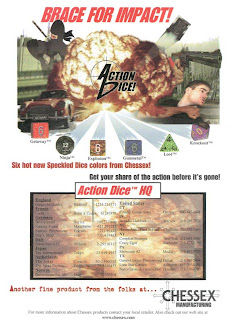 I stared at it for a few seconds. “It kinda looks like a contained explosion.”

“That’s pretty good,” said Well-Done. “They were calling it ‘Vomit’ in the warehouse.

The Explosion dice were one of the colors that was produced some time between 1992 and 1995. They may have been included in the first versions of loose Pound-O-Dice, or maybe the loose samplers, but we don’t know, and I doubt anyone else does, either. Regardless, we had a whole pallet of them at Manufacturing, and no effective way to sell them; they weren’t named, and didn’t have a stock number.

The next LE Speckled dice Sampler was already scheduled, so Well-Done got out some of the dice that had previously been foisted on us. One of them was a striking purple and red and blue die they were calling “Bruise.” Well-Done pointed out that wasn’t an attractive or particularly marketable name. So we changed it to “Knockout” instead. The idea of dice based on action movies was born. Explosion, Knockout, and Getaway were colors already created. Loot, Gunmetal, and Ninja were created by us.

These two themed sets sold very well. The idea of doing Limited Edition sets, and letting the market dictate what colors to keep, was brilliant (Reents was terrible with artistic decisions, but he was very good at logistics). Retailers who bought a LE Loose Dice Sampler got their store listed in a giant ad that ran in The Dragon magazine—still Ground Zero for gaming news in the mid-90s. And the sets sold like hotcakes. Some of the colors sold out.

By the time the third quarter LE set was due, everyone had seen the value of what Well-Done and the rest of us were capable of doing and so when Well-Done requested dice samples based on the planetary colors, lo and behold, Reentz took the requests to Norway and got the Danish Dice Gnome to fire off some D20s for us to look at. It was something of a miracle at the time, because up until then, Reents and the Danish Dice Gnome were the only ones allowed to play with the Speckled dice color combinations. Well-Done purposely asked for a few colors that were outside the range of Celestial Dice, because we didn’t know if we would get another chance to ask for samples. 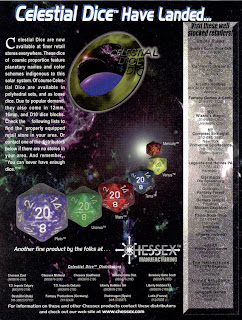 The Celestial Dice were smart, brightly colored, high contrast, and true to the theme and the names. They are, in my opinion, the best Speckled dice release Chessex put out at that time. They were a sign of what we would have done, if they had only let us do more of it.

There were other sets, as well, stand-alone items that came out piecemeal, even though we tried like hell to make them more ordered and thus, meaningful. Reggae, Fourth of July, Valentine’s Day, and Halloween were all just sort of thrown out there, haphazardly. Well-Done wanted to make those (and a few others) into a Holiday Sampler, the kind of which would give people dice to buy all year around. The color we were most excited about? Mardi Gras.

Another set I tried to get off the ground was Endangered Species. These were animal themed colors based on, you guessed it. The idea was to create some interest around the cause and donate a portion of the profits to The World Wildlife Fund. This also did not come to pass, and that’s a damn shame, because you would have loved the gorilla dice. Black and Brown with Gray numbers. It would have been sweet, so sweet.

But all good things had to end. Upper management made some terrible decisions and spent hundreds of thousands of dollars on giant pallets of crap that would never sell, and they basically scuttled their own company. And we were part of the ballast—or rather, we chose to be ballast instead of dead weight and we bailed before the ship sank under our feet.

I did other things for the company, but honestly, working on the Limited Edition Speckled Dice was the most fun, and considering that some of those colors are still around and considered fan-favorites, and nothing else I did for the company exists anymore, it was also the most rewarding.

Next: The Dice, They Are A'Changing...