Okay, that’s a great and terrible exaggeration, but it also kinda isn’t. It’s certainly fair to say that had I not found D&D I would not be the person I am today. Certainly not creatively or professionally. I wouldn't have discovered the Three Musketeers of Weird Tales at the time that I did, for instance. I may not have found my way to Lieber and Moorcock. I had these ideas about wanting to be creative, but I didn't have a focus or a direction. D&D gave me a structure to explore everything: improvisation, mimicry, writing, reading an audience, thinking logically and even critically, and so much more. Role-playing really unlocked my creative potential.

Here’s my Top 5 things that role-playing games did for me, in order: 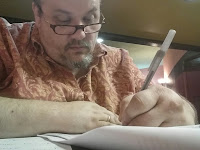 5. “Wormwood, Wormwood…”
Plotting has never been my strong suit, but I would have been way worse at it had it not been for role-playing games. As an analytical reader, I sure wouldn’t have been able to think in terms of scenes or beats or pacing had I not been forced to, on the fly, every weekend, for four years of high school. I couldn’t do math to save my life*, but I could outline the plot of The Grapes of Wrath in ten minutes by my senior year of high school. Or, more importantly, The Hour of the Dragon by Robert E. Howard.

4. Improvisational-Fu
I stopped planning game sessions and started winging it (they call it “pantsing” in writing circles, meaning “by the seat of your pants”) when I was about sixteen. Hell, they never wanted to do the thing I had written down for them anyway; better to just start each session with, “Okay, you’re back at the Golden Eel. The place is jumping. What do you want to do?” and my players always came up with great ways to get themselves up to their necks in trouble.

3. Motivation and Intention
Villains don’t just wake up and say, “Hey, I feel like killing half the planet.” (Too soon?) There was a reason for why the orcs moved into the abandoned keep. There was a reason why the wizard was so obsessed with the stone statue that he slaughtered the entire fishing village to get to it. It made sense when the bad guys were doing something that players could clearly understand, even (and especially) if they didn't agree.

2. Scars are Sexy, and Memorable
Non-player characters had to stand out, especially from the players, who (rightfully so) considered themselves the center of the universe. That’s as may be, but the moons in orbit around those celestial bodies can still be interesting, too. I began looking for ways to make characters come to life, either with memorable features or distinctive traits or even vocal inflection. Amateur actors love D&D.

1. Appendix N
There was no greater influence on my writing than the publication of Appendix N in the AD&D Dungeon Masters Guide. That list was like a checklist to greatness and includes most of the really good works of fantasy in the 20th century. That was our Rosetta Stone to cracking open D&D, and it spawned a generation of Lord of the Rings fans, Conan fans, Fafhrd and Gray Mouser fans, and Elric Fans, and that’s just the tip of the spear.

I never knew there was a controversial stance about Appendix N, namely, that it's stupid and dumb and no one ever used it, ever never in a million billion jillion years. The link to the rant really works best if you imagine it being said by April Ludgate from Parks and Recreation. We get it. You weren't much of a "reader." Point noted. And while I think this kid above is largely full of beans and trolling for an Internet fight, which we all know are the most meaningful fights of all that change people's lives and shit, I do feel compelled to meet him halfway.

I read a lot of stuff off of Appendix N. So did a bunch of other people. Some of it was great, fantastic, sensation. Some of it was dull as beige paint. Some of it hit a deep emotional chord within me, and some of it just rolled in one side of my head and out the other. Touchstone? For me, certainly. For others, yeah. But everyone? Probably not. Just, you know, the articulate readers and writers who are waxing nostalgic at the moment....ahem...anyway...

I didn't necessarily like all of what I read from Appendix N, but it was an encouragement of sorts to try some books that I'd heard of or seen in the Waldenbooks, but hadn't picked up. It didn't rule my world, but what did stick from that list of recommended reading formed a core identity within me that has followed me ever since. Particularly the Howard and Lovecraft. I mean, look who you're talking to.

In the four decades that have followed we have seen the rise of video games in media, along with the advent of computer-generated imagery and digital storytelling. But D&D has always been a storytelling simulator, closer to books and the theater of the mind than the mega-billion dollar industry that it spawned. I was so pleased that 5th edition reprinted that inspirational list with more recent works included.

If you didn't read Appendix N, well, it's still out there, and there's some stuff on it you will probably like. Gygax was particularly taken with Vance, Howard, and Tolkien and said so on many occasions. But you're (theoretically) an adult, or nearly so. Go do what you want.

I’m glad that tabletop gaming is in the middle of this incredible Renaissance and growing, fueled by the new Maker culture, family game nights, and other DIY movements, and these massive leaps in technology. It’s funny how many high end computer cameras and software and digital editing systems are employed to make YouTube shows about sitting at a table and talking to each other. Or is it Ironic? Maybe a little of both.

*Not strictly accurate. I could do character sheet math in my head in seconds, often rounding up or down as needed, depending on the game system. But boring old Algebra? I had to take THAT in Summer school.
- August 02, 2018