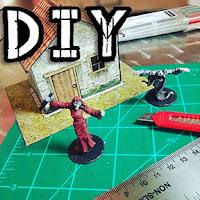 One of the things that make me productive as a creative person is that I know myself well enough to know how I work best: surrounded by toys and little distractions. If I'm fomenting a  brainstorm, I tend to fidget, especially if I have a lot of ideas and I need to sort through them. On top of that, I've got juuuuuuust enough A.D.D. tendencies that I need structure to reign in the chaos. That's partially why I'm so attracted to bullet journaling and I've written about it twice now.

Whether I'm sitting at my computer or at a table, trying to come up with brilliant ideas, I like to have certain things at hand. I got tired of having all of my loose items in an unruly pile around my computer, or worse, having to chase down things like dice for randomly and obsessively rolling four d6, over and over, and taking the highest three dice, or rolling two d20 and saying, "advantage," and "disadvantage," over and over again. See, I've got special dice for that. My creation dice, which don't hit the table; they are for when I need to roll random numbers during the creation process. I mean, what's the use of having eleventy-thousand goddamn dice if you can't compartmentalize them, thus giving you the impression that your habit is not, in fact, out of control and you need help...anyway.

I came up with this idea and I really like it. It's not a million dollar innovation, but more of a Life Hack. It works for me, and if you see any use or value to it, it will by necessity be something you have to modify to make work for you.

This is my DM Creation Toolbox. It's tidy, and portable, and it looks pretty cool. I can drop this in a knapsack if I'm on the go, or (most often) it just sits on my writing desk, waiting patiently for me to crack it open.

The design on the front is very earthy-crunchy, but also...if you kinda squint at it...that could also be a deranged monk's interpretation of Dread Cthulhu. There's no way I'm covering that up.


The box is one of the many craft items I bought at one of the big box stores. You can find them with interesting frequency because, apparently, the whole of America needs a camouflaged stash box for their weed. The big box stores are, weirdly, cheaper than online, probably because the boxes are hard to ship. Whatever. You can choose from a ton of designs, or you can pick something you hate and mod it for yourself. There are a ton of videos that show you how to do this. For me, it was more important that I have a finished interior that looked like a book on the outside. So this is what I went with. 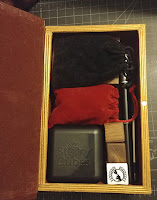 Inside, you can see it's crammed full of stuff. This is just about everything I need to get the old creative juices flowing. All that's missing is a notebook or a journal to write stuff down in, or doodle, or make lists, or whatever I need to do.

I find that graph paper helps me organize things the most. Lines are fine if I'm writing something, but often with gaming I need to make lists or charts or doodle a little map or practice map hatching or any number of other things that graph paper makes so much easier for me. I don't like the dots. Can't use them. Too loosey-goosey. I'm a grid man. Okay, enough navel-gazing. Let's break this down; my E.D.D.M.C. (that's Every Day Dungeon Master Carry, for those of you who aren't fully aware of the Gamer-Prepper Sub-Culture out there). 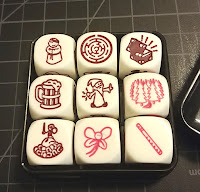 These are Rory's Story Cubes. You can find out all you want to know about them right here. They are very cool; these dice all have pictograms on them and you can buy thematic sets to roll and create random elements to incorporate into a story. They were designed for kids to teach them story-telling skills, but I've never seen kid one play with these things. What I have seen is forty-year old game masters swear by them. I have a set of nine, custom selected for their content, which is Fantasia, Mythic, and Medieval. They are sold in sets of nine and booster packs of three. There are also branded sets that come with this cool little carrying tray. 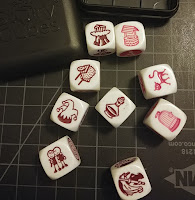 To make these work, I'd roll as many or as few as I wanted, and then sort of sift through them to see if anything made sense. It's a lot like rooting through sheep's entrails, but not gross, or as ambiguous. The images are pretty recognizable, but also open to interpretation. For example, you can see the birdcage with the open door. That could be an escape, or it could refer to something that has escaped, or maybe something that was taken. You've got options.

Most of these elements are usable as-is in a fantasy role-playing game. You could do much worse using them for designing an evening's encounter. 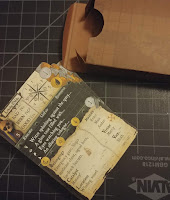 These little gems are an interesting idea that I fell in love with. They are called The GameMaster's Apprentice.  If you like DMing on the fly, then these are your cards, for sure. The deck I have here is nautically-themed, for many reasons I won't go into, but there are actually a number of genre-flavored decks that will suit your needs.

I actually use the cards to jump-start conversations with myself. There are descriptive words, small inklings of plot ideas, character names, and even abstract concepts. Each card is double sided, and there's fifty-plus cards in the deck. I've only used a fraction of the cards, but they are great for getting out of your head and chasing down new ideas.


You can buy the cards at drivethrucards.com and while they aren't cheap, if this is something you think you'll use, it's a good investment with a lot of replay value. Oh, and here's another tip from Captain RetroGrump. The box to put the cards in costs a dollar extra. You may think, "That's bullshit! I'm already paying twenty bucks for the cards!" Don't be me. Buy the damned plastic box.

You see this box in my hand? Yeah, I had to make that. I didn't have another plastic box to put the cards in, and I have never been a "rubber band them up" kind of guy. So I spent half a day downloading a card box template, and then cutting it out three times because I couldn't get the edges to line up right and also I had to fold it differently to fit the deck, which is slightly larger than a regular deck, and yeah, my tuck box looks cool, but you know what? In time, labor, materials, and effort, it cost me $28.47 to make. Know how much a plastic deck box would have cost me from DriveThruCards? A buck. 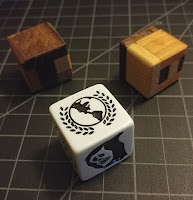 These dice are weird. The white one is a Tarot die (from the set I reviewed, here) and it's the one with the most interesting set of faces on it, representing the major arcana. Their poor design is my delight! The other two dice are made out of boxwood and they are pressed layers of wood. To know what number is showing, you count the pieces of wood. The one on the left is 1 and the one on the right is five.

I like these dice because they are odd, and because they force me to look at what I am rolling and also, they are pleasant to hold.  They have replaced the Fidget Cube I had in the kit, which had a little too much going on for me. What does that say about me when the Fidget Cube is such a distraction for me? Don't answer that. 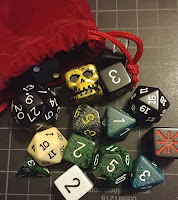 You always need dice. These are my "creation dice." They are simple. They are easy to read. They are the right dice for this process. Also, a lot of them are black and white. This is no accident.  Sometimes you need to just make a decision and go.

Fun fact: I have two differently-colored d10 dice that I use for rolling percentiles. I don't have a tens d10. I call black high, like in the good old days, and roll percentile dice like that. It's not a big deal, but it really connects me to my dim and distant gamer past in ways I don't quite understand.


Yeah, those are fake coins for FRPG games. Don't judge me. I sometimes practice sleight-of-hand when I am thinking, and I like working with these coins. They are thematically appropriate, and easy to manipulate.

They also feel good in my hand. I know they aren't real gold, but the pouch of coins is pretty iconic in fantasy gaming, and so when I am putting treasure in a dungeon, more often than not, I'll have the bag out, jingling it like a goofus.

This is a mechanical pencil, a Zebra 301, because I love their pens and pencils; so clean and professional-looking.  Next to that is a ball-point pen that looks like a Harry Potter wand. It does not look professional and I don't care. It's my idea box. The pen is for concrete ideas, and the pencil is for doodling, sketching, mapping, etc.

Most of the time, I just use the pen, because I'm a nerd, but I need the pencil for drawing stuff. I just do. I may be adding another pen or two for lettering at some point, because I have room, but right now, the pen and pencil I have cover about 90% of my needs.

And that's it. The whole thing weighs about as much as a hardcover book, which I'd be carrying around, anyway, so whatever. I mostly enjoy how it tidies up my work space, but I have to say, there's something cool about having a hollow book with gold coins and a magic wand inside.

I've seen this idea before as a character kit, for players, but I've never seen anything like this for Dungeon Masters. Have you? Is this something you'd put together for yourself? Drop me a line or show me pictures if you have.